Use the following Site to get informed about the possibilities to perform a re-hosting of Oracle’s on-Premise Applications to Oracle Cloud Infrastructure (OCI):

This will provide links for Siebel, eBS, PSFT and JDE. 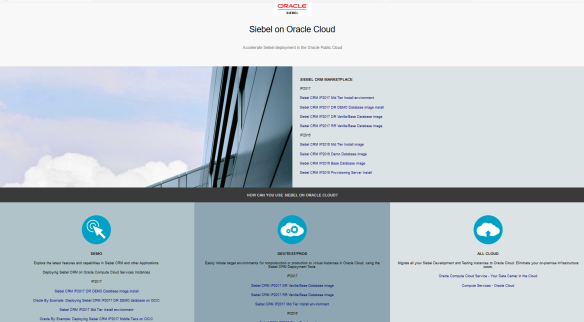 If Siebel CRM and Oracle BI EE are running on two different Servers (which should be the case for most implementations), then the embedded Oracle BI screens may not function properly for all actions such as, opening the properties for List Formats, requiring a second click for editing within the formula editor of the segment designer due some issues with cross-site scripting. This behavior is also documented within the following SR: avoid UI navigation issues associated to Siebel Marketing – OpenUI integrated to OBI (2008422.1) and within the Official documentation of the Installation guide: https://docs.oracle.com/cd/E23943_01/bi.1111/e16364/siebel_crm_integration.htm#BIEIT3307

Since these various issue are caused by some cross-site scripting, the workaround is to pretend to the client that Siebel and Oracle BI are running on the same host, hence creating a single virtual domain for Siebel and OBIEE.

Within the support note of the SR (2008422.1) OHS is used for this proxy reverse configuration. The following diagram shows the updated request flow for the single virtual domain:

A short step-by-step guide for the Workaround using OHS can be found here.

For the earlier releases of Siebel CRM the Official Bookshelf (pdf version here) also contained a documentation of Business Processes to describe the activity flow within the Application from a starting point to a end point like the example below:

However, these have been discontinued from Version 7.5 for forth following releases. While some parts of the Oracle Organizations certainly maintained these afterwards as Assets, these were not general available as part of the official documentation anymore. For the new Fusion Application Software, which combines all previous separated products from PeopleSoft, e-Business Suite and Siebel into a single Application, the Business Process models are back. While they are not published on alongside the Official Documentation they are accessible via the Oracle Support Portal at the following site: Oracle Fusion Business Process Models: Homepage (Doc ID 1542019.1).

The above site lists the following Level 1 Business process area e.g. Marketing. Level 2 of the Business Process then describes the step in the process e.g. Develop Campaign and afterwards Execute Campaign. The Level 3 then contains a detailed activity flow in MS Visio e.g. Launch Campaign and Manage responses.

A analyst article highlighting the features for Eloqua can be found here.
Both products allow to define the target group of the Campaign via a Segmentation designer:

Customers already having Siebel Marketing can use the following process to integrate Siebel Marketing with the Oracle Marketing Cloud (Eloqua). This allows to use the same segments and same customer data to define a target group and execute Campaigns in  digital channels provided by Eloqua.

Since Siebel Marketing itself uses the Oracle Business Intelligence Server to access the Segmentation data, the same interfaces/process may be used from Eloqua for accessing the same data. The Oracle Business Intelligence Server offers a web service API described in a previous post which can also be invoked by Eloqua e.g. to use a previously defined Segment in Siebel Marketing.

To integrate Siebel with Eloqua (Step “Load Segments to Eloqua”) the Oracle BI Server can generate the Members of a segment based on segment criteria definition using the writeListFiles SOAP call. The definition of this SOAP call is described with the xsd:

Below is an example of this call using the Oracle BI Action framework to demonstrate the outside call and passing of parameters:

The format of the generated file that contains the target group members of the Segment can be defined using the Load List format:

The generated file can then be loaded into Eloqua as the Campaign members.

Further information can be found here:

Once a direct mail Campaign is launched/executed in Siebel, a Export List is instantiated based on the Export List format (defined in OBIEE and typically containing the Campaign Members), writing the file to the shared marketing file system for distributing to external Agencies.

This progress and completion of the process between OBIEE writing the file and Siebel loading the file via the Integration Object to the Campaign Member Table S_CAMP_CON can also be check from the Task Log Applet of the Campaign :

While the Oracle BI system will check the current campaign Members (at point of launching the Campaign) and associate the data according to the export list format definition, not all scenarios might return data. E.g. a Export list may join the Campaign Members with a Asset, but in case of a small Campaign maybe none of the selected Members might own a Asset resulting in zero Records. In this no(zero) records is the correct result of the Export List. This is also displayed as a Warning in the Task Log Applet:

However, a Bug exists (3-12931858661 : List Export formats in Marketing Segmentation behave differently when there is no data) in the current release of Oracle BI (OBIEE) for this process, as a file containing zero Records is not written as a file (no file created) leading to a Error in Siebel instead:

Since the Issue is with Oracle BI this can also be re-produced within the Oracle BI instance. When clicking the Generate Preview button a error Message is displayed in the List Format designer, informing that no file has been created:

Which is also logged in the Administration of Marketing Jobs view:

To enforce the generation of Export files, even in case of zero records the XML definition of the Export List needs to be changed by adding a header / footer XML tag.

When creating a new Export list the XML definition does not contain a header / footer XML Tag when clicking the “Get XML” Button:

This header/ footer Tag will ensure that a Export file is always written to the shared Marketing file system. The preview looks then like the following: 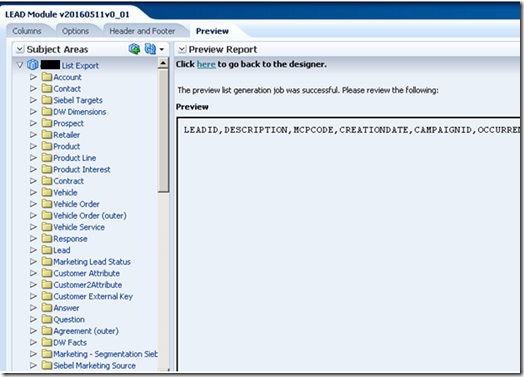 Every larger Company requires a CRM system to structure and standardize their customer facing process. The CRM system can be classified by many criteria:

Most companies do not even use the CRM System as the Master system for their Customer data, but essential to relate certain other data to the customer e.g. Service Requests, Activities such as call the customer and store the summary of the call or even to track the Orders and the Order status (Order Management). Hence, the breath of the CRM system may vary depending on how much functionality is actually handled by the system. Same CRM system might actually only be used very thin e.g. to store the incoming claims and scan the documents or archive the emails for the claim and the related corresponds. Other CRM system might have a very high number of interfaces to other system e.g. billing, CDR, etc to provide a 360° degree view of the customer. Some other CRM systems might have a very high/low number of Employees using the system. When deploying a CRM System within B2C Companies, such as Insurance or Telecom many internal Users require access to the system to conduct their daily Job, while some other function like Marketing only require a very low number of Users within the Headquarter to actually create a Marketing campaign and execute the campaign.

The below diagram shows the size for some sample customers with Siebel CRM and their internal User size:

A very interesting insight describing the effort needed to maintain such a high number of users can be found in the following video (only in german):

Most often Siebel Marketing and Oracle BI will be used to load campaign members for a marketing campaign based on Segment criteria defined within Oracle BI:

The Siebel Campaign Membership is then loaded based on the defined Load List Format with Type “Campaign Load”:

Once the Marketing Users clicks the Campaign Load Button the below Siebel Workflow is executed and triggers the generation of a File (csv) that is loaded by the Workflow into the Siebel Campaign Membership:

However, the Standard (BI Applications 7.9.6.4) additionally offers to load other Entities than the Campaign Membership:

(Described within the Official Bookshelf Documentation.)

For this, the following standard Workflows exist:

E.g. for creating Leads the Workflow:

The Workflows also triggers the generation of a File (csv) by Oracle BI which is being loaded into the respective Siebel Entity e.g. Lead.

This provides Users with the possibility to define criteria that qualify a lead for a specific Campaign. If these criteria (expressed as Segment criteria) are being fulfilled, a Lead will be created within Siebel. A Segment to qualify a Lead based on e.g.Campaign Responses could look like the following:

The Workflow “Marketing Create Leads” then loads the Marketing Lead Integration Object (described above), which has the following definition:

And the corresponding standard Load List definition of Oracle BI:

Instead of being of Type “Campaign Load” the above Standard Load List is of Type “BI Data Load”. To synchronize customer data another Load List Type is available “Customer Synchronization”.

A Marketing User can configure all this steps during design-time of a Marketing Campaign with the Program flow: 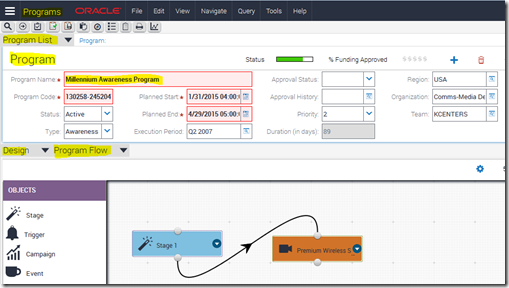 Only Load List of Type “BI Data Load” are available for a Marketing User.

2) specifying the stored segment (created beforehand) to evaluate/qualify a Lead based on certain Campaign Responses given by the Campaign Participants.

To summarize. Siebel Marketing offers not only the possibility to load Campaign Members into the Campaign Membership (S_CAMP_CON Table) but also Responses or Leads via standard Marketing Workflows and Load Lists provided out-of-the-box.